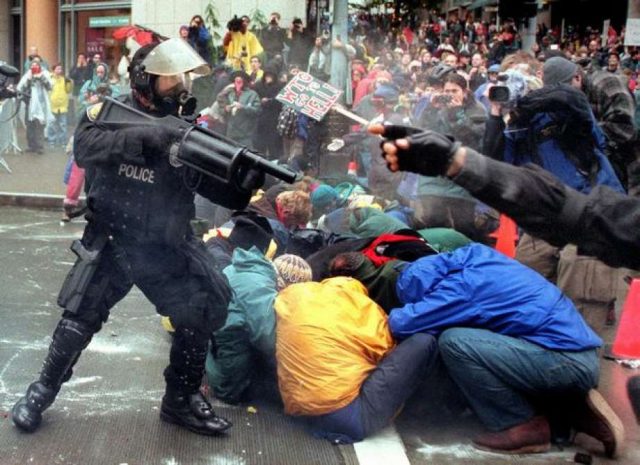 The militarization of police relates to the use of military equipment and tactics by law enforcement officers. The equipment may include assault rifles, armored vehicles, submachine guns, flashbang grenades, sniper rifles, tear gas, and items from the Special Weapons and Tactics (SWAT) weapons list.

Police militarization uses information gathering techniques used by intelligence agencies. Law enforcement will often focus on certain members of the public. Peter Kraska, professor in the School of Justice Studies at Eastern Kentucky University, defines the militarization of police as “the process whereby civilian police increasingly draw from and pattern themselves around, the tenets of militarism and the military model.”

Civilians, law enforcement agencies, and advocacy groups have strong opinions on giving police weapons of war. Agencies like the American Civil Liberties Union (ACLU) and the Cato Institute speak out against the practice stating it causes violence. The Fraternal Order of Police supports the law. They saying that the equipment increases the safety of officers. It also helps them to protect the public and first responders.

However, a 2017 study reported that police forces using military equipment were more likely to have violent encounters with the public.

In 2015, President Barack Obama reviewed the 1033 Program with the aim of restricting certain items from being transferred to non-military agencies. Obama’s team drafted a “prohibited equipment list,” outlining items that could no longer be transferred to law enforcement agencies because there is “substantial risk of misusing or overusing these items, which are seen as militaristic in nature.”

The team also created a “controlled equipment list,” restricting specific items. Police departments can obtain the items on the list, but they have to show the need and that they had been properly trained.

The pros and cons of having a militarized police force may lie in the eye of the beholder. Records show that riots and other acts of civil unrest have been stopped sooner due to the presence of a heavily armed police force. If the police hadn’t been well armed, more people may have been injured or fatally wounded. Other reports show incidents wherein police have used excessive force, injuring or killing people when it wasn’t necessary.

Some say that police militarization is necessary to fight a “war on police.” Donald Trump, Texas Senator Ted Cruz, Texas Lt. Governor Dan Patrick, and former New York Police Commissioner Bill Bratton have all said that there is a war on cops, and that police must be able to defend themselves.

In 1985, Philadelphia police tried to serve arrest warrants at a house used by MOVE black liberation activists. Police said that the group members shot at them, starting a gunfight. Police Commissioner Sambor gave orders to bomb the house. Philadelphia Police Lt. Frank Powell dropped two one-pound bombs on the building, causing a several explosions. A fire started and spread to nearby buildings. The fire destroyed 65 houses and killed eleven people including five children.

The siege at the Branch Davidian compound took place near Waco, Texas from February 28 to April 19, 1993. Law enforcement suspected the Branch Davidians of having illegal weapons. The Bureau of Alcohol, Tobacco, and Firearms (ATF) went to the house with a search warrant and arrest warrants for Koresh and some of the group’s members. A gunfight started between the two groups when ATF officers tried to serve the warrants. The fight killed four agents and six members of the group. The FBI’s Hostage Rescue Team (HRT) stepped in and a 51-day standoff began. The HRT threw tear gas into the compound. A fire broke out and 76 people died, including leader David Koresh.

The 1033 Program is active, limiting items that police are allowed to have under law. In 2017, U.S. Attorney General Jeff Sessions announced removing the restrictions stating that the Trump Administration would not “put superficial concerns above public safety.”